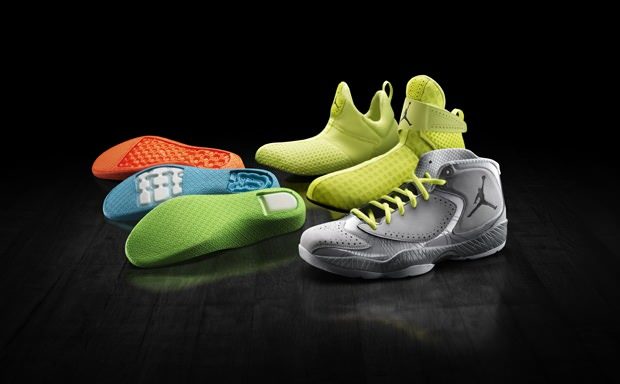 About a month ago, we shared with you our performance reviews on the signature sneakers of Carmelo Anthony, Dwyane Wade and Chris Paul. The Jordan Melo M8, the Jordan Fly Wade 2 and the Jordan CP3.V represent Jordan Brand’s pillars of ‘Fly Through’, ‘Fly Over’ and ‘Fly Around’, respectively, and the Air Jordan 2012 is simply a proficient combination of all three. After testing the aforementioned signatures, we devoted our performance time and energy to the Air Jordan 2012, the 27th shoe in the Air Jordan franchise. Does the 2012’s performance capabilities match up with its top-of-the-line, crafted aesthetics? Is the 2012’s modularity helpful to all types of players? Find out the answer to these questions and more in our Air Jordan 2012 performance review.

?Through comprehensive research, we saw an increasing need for footwear that can be customized to meet the needs of the world?s best athletes.” – Tinker Hatfield

Cushioning: This section, in my opinion, is the Air Jordan 2012’s greatest strength and ties back to the underlying theme of this shoe: modularity. If a full-length Zoom unit is your preference, the Air Jordan 2012 suits you. If you are more inclined to play with a combination of Zoom and an Air-Sole unit, then the 2012 has that option too. If you would rather simply go with Zoom in the heel, then this shoe offers that as well. Below, are detailed descriptions of what each sole entails, so you can choose which one best fits your style of play.

Fly Through (orange midsole) – This is perhaps the most cushioned of the three, yet, it also is the least flexible. It is better suited for play in the post and under the basket seeing that it lacks the flexibility a guard needs to maneuver around the perimeter. It incorporates a full-length Air Sole bag and because of this, it is the most balanced and even-killed of the three midsoles. To further touch on the post play and under-the-basket playing style, this sole option is ideal because it necessarily protects impaction. Therefore, if you’re coming down from a rebound, a dunk or simply returning to the hardwood from contesting a shot, the “Fly Through” option provides a plush, balanced landing pad for the foot.

Fly Over (blue midsole) – This option is undoubtedly the most responsive and features more of a springiness, bouncy feel than the other two. I would recommend this option to an explosive player who uses pure athleticism as a main advantage and characteristic in his/her game. The “Fly Over” midsole features an encapsulated Air Sole unit in the heel for ultra responsiveness and a Zoom unit in the forefoot. The Zoom unit in this midsole is different from the Zoom units seen on the other two because it is articulated in beneficial, high-wear areas. Specifically, the Zoom unit features nine different chambers at the bottom of the foot, so that the wearer has a good amount of cushion in no every possible direction. Whenever you are curling off of a screen, cutting in a certain direction or using your pivot foot as a launch pad for your first step, the “Fly Over” option allows your feet to be cushioned no matter what movement you make.

Fly Around (green midsole) – This is easily the most flexible of the three midsoles and features the low-to-the-ground feel that a perimeter-oriented player covets. It is personally my favorite because of its guard-oriented attributes. The “Fly Around” option simply features an ultra responsive Zoom unit in the heel and nothing in the forefoot, which is why it is the most flexible of the three. The absence of technology in the forefoot allows the wearer to have a freer range of motion.

Responsiveness: This section further denotes the cushioning aspect of the Air Jordan 2012. As mentioned above, the greatest level of responsiveness is found in the “Fly Over” option, which possesses an encapsulated Air Sole unit in the heel and articulated Zoom Air in the heel. Overall, it is the bounciest of the three, but you can also feel a great deal of springiness in the “Fly Around” and “Fly Through” options as well.

Traction: No matter what position you play, what inner sleeve you select and/or what midsole option you decide to go with, the traction aspect of a great performance shoe has to be legitimate. Jordan Brand did not incorporate the beloved herringbone traction on the 2012, but they definitely delivered with this multi-directional traction pattern. If you examine the outsole closely, you’ll see that diamond shapes make up the majority of the outsole design, yet, in high-wear areas, such as the balls of your foot and the exterior of the lateral sides of each shoe, you’ll see tiny, miniature squares inside of the aforementioned diamond shapes. It’s almost as if the traction is double layered in these areas, which helps with grip and friction on stop-and-go movements, hesitations, jabbing and reacting quickly while moving laterally on defense.

Lockdown: If you recall, the Jordan Fly Wade 2 possessed the highest score of the three Jordan Brand signature shoes (Jordan Melo M8, Jordan Fly Wade 2, Jordan CP3.V) in last month’s performance review testing pertaining to lockdown. The Air Jordan 2012 is similar in lockdown to the Fly Wade 2’s snug fit. Despite having a wider base and a more materials on the upper, the Air Jordan 2012 actually fits like a slimmed down shoe. I didn’t have any problems when lacing it up tightly. It grasped my foot, as all performance sneakers should.

As for the two inner sleeves, the high-top option offers more of a snug, locked down fit because of the padding on the heel counter area, which was also incorporated on the previously mentioned Dwyane Wade signature.

Support: Although the Air Jordan 2012 comes with a low-top inner sleeve and a high-top inner sleeve, it is basically a mid-top silhouette. Both inner sleeves work perfectly in regards to ankle support. Many might think the high-top inner sleeve is crafted better for ankle support seeing that it comes above your ankle and features a strap, but the flexibility of it doesn’t do much in the support category. It is basically an enlarged sock; however, as we mentioned above in the lockdown category, it does possess more of a snug fit because of the padding in the heel.

As for the outer shell, the Air Jordan 2012 is comprised of a one-piece Flywire upper and leather or nubuck panels (depending on which pair you have) over the toe, side panel and heel areas. This makes for a very supportive, sturdy shell all while being very flexible. There is not too much restriction in this shoe. The 2012 reminds me of the Nike Zoom Kobe V in a way because the Flywire is very bendable and stretchy.

Durability: Flywire has always been questioned when it comes to durability, but it seems to be as durable as it can be on the Air Jordan 2012. I love the fact that Jordan Brand decided to apply leather or nubuck (depending on which pair you have) on the some of the high-wear areas such as the toe cap. Despite it’s flexibility, the Air Jordan 2012 is an overall sturdy wear. I do think the leather-based pairs will maintain their shapes and last longer than the nubuck pairs though.

Breathability: I was not too enthused by the breathability factor of this shoe. It is perhaps the worst element of this shoe, but not one shoe is perfect so we can’t take anything away from it. With it being a flexible construction, I looked forward to it being a pretty ventilated shoe, but there are not a lot of open holes and vents for air to seep through. It didn’t take long for my foot to perspire and feel a little compressed in this shoe. It is not a horrible shoe in regards to breathability, but there was not a glaring positive in this category either.

Overview: The Air Jordan 2012 is undoubtedly one of the better performing shoes on the market right now. The six combinations, which included three different midsole options and two inner sleeve options, can be ideal for just about any type of playing style. Besides the modularity factor, the Air Jordan 2012 provides great lockdown, traction and support by way of the construction alone. It is definitely a step in the right direction for Jordan Brand’s performance line and is undoubtedly a better performance shoe than the Air Jordan 2011. Jordan Brand’s willingness to incorporate the best elements of the Jordan CP3.V, the Jordan Melo M8 and the Jordan Fly Wade 2 into one shoe made for a top-of-the-line, versatile performance monster.

The Air Jordan 2012 Deluxe is now available at Jordan Brand retailers for $223. Stay tuned to for the release information of the upcoming Air Jordan 2012 Black/Varsity Red ($180) at the Nice Kicks shop.