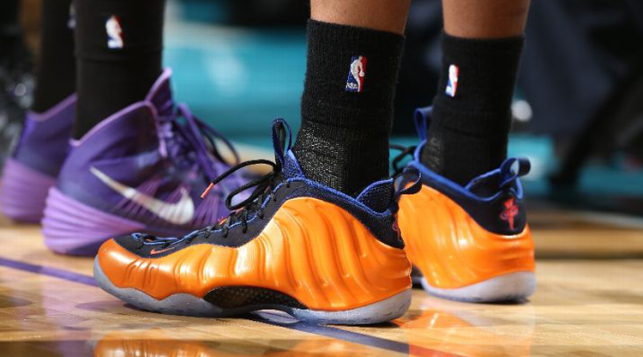 After two months of the 2014-2015 NBA season, we take an overall look at the Kicks On Court Champion race and the highlights we’ve witnessed in Month 2.

Wilson Chandler was one of the biggest Kicks On Court regulars during Month 2. The Benton Harbor native took to the court in five different KD7 iDs during the second month in addition to wears of the ’88 retro Air Jordan 3 and the “35,000 Degrees” KD7.

Terrence Ross’ index hasn’t changed much since Month 1. The “Playoff” Air Jordan 8, the “Gold” Nike Kobe 9 Elite and a few others have controlled his on-court rotation as of late.

Nate Robinson has not dominated our Kicks On Court headlines as of late. Instead, he has kept it consistent with the same retros he brought out during Month 1. Specifically, he has kept his feet in the “Taxi” Air Jordan 12, the “Rising Sun” Air Jordan 12 and the “He Got Game” Air Jordan 13.

Tony Wroten recently returned to the court after missing most of Month 2 with a sprained right knee. Therefore, he hasn’t dominated our Kicks On Court headlines as he did during Month 1. Since his return, Wroten has worn the “Black Suede” Nike Air Foamposite One through two games.

J.R. Smith began Month 2 on a tear by consecutively bringing out four Nike Kobe 9 Elite iDs in Knicks colors. Since then, the New Jersey native has been absent from action due to a left foot injury.