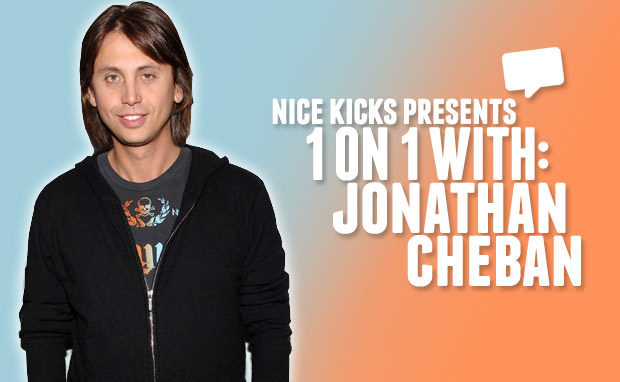 It?s not bad being Jonathan Cheban, but it is busy. A regular day begins at 9 AM in sunny Florida, awoken by fresh juice delivery from OnJuice and followed by a workout session with LeBron James?s personal trainer. The next move finds him at his day job, filming Kim and Kourtney Take Miami alongside two lovely ladies you may have heard of. TV time transitions into digital dominance via his new website, Elite Daily, with the day concluding in side projects such as his Sushi Mikasa restaurant and personal jewelry line.

Despite this heavy, though polished, plate, Cheban still makes time for shoe shopping. While it?d be easy to assume the man beside Kim Kardashian is on the heels of a recent celebrity trend, one look at the heels of his Air Jordan 4s quickly writes off such a notion. We caught up with the reality star and recent CSS regular to discuss rocking OGs, talking style with Kanye, and what?s in Kim K?s sneaker closet.

Nice Kicks: How long would you say you’ve been into sneakers?

Jonathan Cheban: I?ve literally been into sneakers since 1987– especially as a Jordan fan. The 4s? I was addicted to them, just waiting for the originals to come out. It drives me crazy reading the comments like, ?Oh, he?s wearing Jordans now?? I was wearing Jordans before they were born. It?s just really funny to me.

Nice Kicks: Did Jordan draw you in more as a player or as a style icon?

Jonathan Cheban: Back then it was both. He was on fire and the sneakers had the perfect shape to them. The color combinations were unbelievable. When I saw the ?Cement? 4s, I was just shaken. They were so sick. Ever since then, I?ve just been a huge Jordan fan.

Nice Kicks: Which pair of Jordans are your favorite?

Jonathan Cheban: Definitely the Air Jordan 4s. Those are my favorite. I still have the originals; I actually wore them yesterday. There?s such a difference between the originals and the retros. The leather is so different. My leather is mushy and so comfy inside and the new ones are completely different. People running around in retros don?t even know what a good sneaker is. It?s no comparison.

Nice Kicks: Have sneakers always been a part of your personal style?

Jonathan Cheban: Professionally, I used to wear low Dunks with jackets and jeans before anyone was really doing that. It was a casual chic look and I?d go to fancy events with Dunks. Then a lot of people started doing that so I stopped. You can?t be behind the times with the followers.