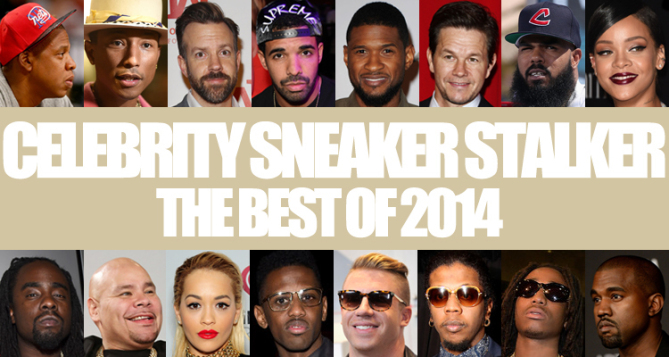 2014 was the year of the artist endorsement deal and Celebrity Sneaker Stalker was there for all of it. Adidas made moves with collaborative collections for Pharrell and Rita Ora, while Kanye kept fans watching his every footstep. PUMA took a similar approach, inking deals with up and coming artists while closing out the year by signing Rihanna. Jordan Brand still proved to be on top of their game, lacing the likes of Drake, Macklemore and Usher with exclusives that may never see shelves.

Deal or no deal, both A-listers and artists on the rise took their kick games up another level and we took notice. Column favorites like Wale, Stalley and Trinidad Jame$ continued to fight for first on the biggest basketball drops, all the while breaking necks with vault heat. Though staying fly has long been a young man’s game, living legends like Jay Z, Lil Wayne, Fabolous and Fat Joe caught a second wind in ’14, proving they could still dress and debut with the best of them. As the year comes to a close, see the best moments from Celebrity Sneaker Stalker and let us know who brought it in 2014 in the voting poll and the comment section.