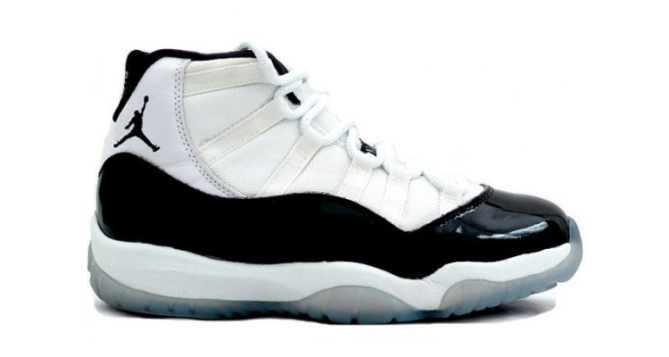 As we count down the days to the release of the “Legend Blue” Air Jordan 11, we are highlighting a different Air Jordan 11 each day in our 11 Days of 11s series.

Michael Jordan debuted the Air Jordan 11 on court with the Space Jam colorway, but the White/Black-Dark Concord colorway was the first to hit stores in 1995.  Nike always put tons of effort and marketing budget behind the latest Air Jordan shoe year after year, but the campaign behind the Air Jordan 11 was one of the best following the years working with Spike Lee.

If you didn’t catch Michael Jordan on a televised game, Nike made sure you saw the shoes made for MJ with the famous “100 foot dunk” 30 second commercial spot that aired nationally.

The White/Black colorway of the Air Jordan 11 has returned a couple of times since its debut in 1995. The first coming in 2000, followed by the 2006 DMP (with gold accents instead of Deep Concord), and most recently in 2011. The shoe got a haircut by Jordan Brand and released in low-top form earlier this year as one of the hottest selling retro Air Jordan shoes of the year.

Most significant to NBA and Jordan history, the Air Jordan 11 “Concord” was the shoe that Jordan wore throughout the historic 1995-96 season when the Chicago Bulls set a league record for wins in a regular season going 72-10 before winning it all in the NBA Finals.